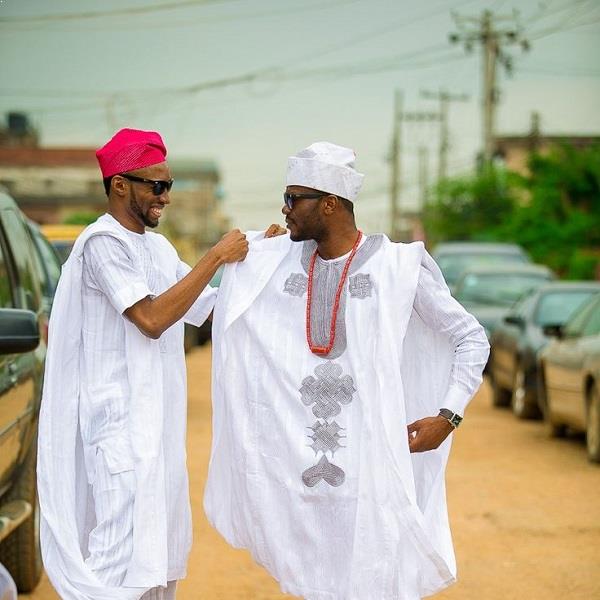 The Agbada is a traditional African outfit that speaks on behalf of who wears it. The word “Agbada” happens to be a Yoruba term for flowing garments usually worn on other piece of clothing which ends up being native wears. Usually, the concept of the flowing garment is to feature an embroidery amongst other designs if the owner is specific. It is highly respected as well as admired and at a time usually was an outfit for the elderly but in present times, mostly every man both old and young you come across, features in this.
One could say the Agbada is an outfit of pride, glory and class. In most occasions, there sure are different categories of people and always with the presence of the “Agbada Gang”.

Lately, every traditional wedding no matter the tribe features men stylishly dressed in this outfit.

The color White allows you to adorn any other color as it is a universal color and like you see in some pictures, the White Agbada fits perfectly any color of native you decide to wear underneath.

Every Agbada features the presence of an embroidery which could be any color but usually something brighter than the color used in making the garment. Embroidery is a form of design which allows for a dapper look and gives the garment a much more attractive and insightful purpose. It could be any design depending on what the person who is to wear it specifies to his tailor.

Without the embroidery, the piece of cloth would be regarded as just a “garment” but when an embroidery is featured, then you officially have an “Agbada” and no more a piece of garment.

I would say it gives both depending on how it is worn. Trust me, the Agbada goes with everything including English wears as well as Native outfits.

In terms of swag, the Agbada could be worn over a Jean featuring a nice shirt to go with and a pair of sneakers. We have seen the likes of Nigerian artists such as Olamide, Ice Prince, Ycee feature in this style of dressing and it came out extremely swaggish.

When it comes to Class, I would start by mentioning the likes of E- Money, Dino Malaye, Richard Mofe Damijo amongst others. The Agbada over a well-tailored native wear with a lovely shoe to go, makes it all Classy to admire. Please, do not even think of putting on a laced up shoe on an Agbada, leave that for your suit and tie.

I have a couple friends who would always throw jokes at each other with comments like, “you dey wear Agbada, you no get motor”. Quite hilarious though but true and so please, if you do not have a car, then at least get a cab. It is Agbada and not just Agbada but WHITE AGBADA we are talking about here.