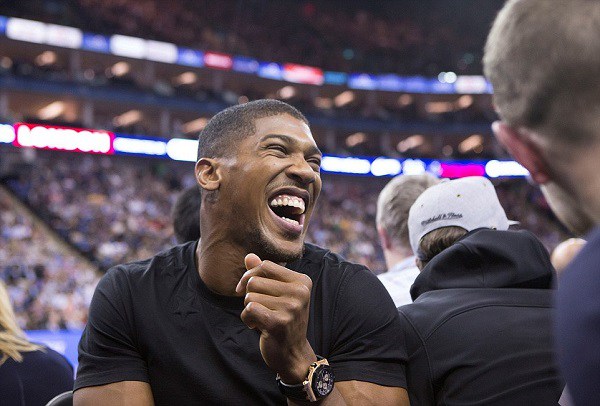 You probably heard about Anthony Joshua, the 27 year old Nigerian born British heavy Weight boxer who did us proud when he emerged the IBF World Heavyweight Champion on th e 9th of April.
Before held the British and Commonwealth heavyweight titles
ASKMEN caught up with him to find out the lifestyle of the celebrity athete

“I’m up at 7:15. It’s not quite Rocky style, but by 7:45 we’re out on the track doing our exercises. We always start the morning with some intense cardio, which is intended to replicate boxing.

“Cardio is a nice way to start the morning, man. Whether you sit on the bike for half an hour or throw on two jumpers and just sweat, it’s good to get up, get the body active, put on your headphones and just pedal away. If not, you can jog on the treadmill, swim, just get the body working. Get up, train, eat after.”

“I don’t have a strict diet, I keep it simple. I try to eat fish, meat, veg and carbs – potatoes and rice – but I’ll try and pack it in because as I’m burning so much energy, I have to see food as an energy source. Breakfast is porridge – that’s my starter – then six poached eggs, toast, little bowl of fruit and two yoghurts. I also have loads of water throughout the day; you’ve gotta stay hydrated.”

I’ll get seven hours sleep a night, but after breakfast I’ll have an hour just resting, to recover. In Spain they all have siestas, even businessmen. I don’t want anyone to lose their jobs, like ‘AJ said to snooze at two o’clock!’ but I think it’s important, especially if you’re not getting quite enough at night time. Sleeping is like meditation – it’s good to rest the body, but also to shut the mind down for a bit.”

“No later than 11:30 we’ll be in the gym for a strength, conditioning and agility session. We’ll be working on a lot of power moves that I can take into the ring – functional stuff to really work on strengthening the core area, as without your legs or your arms you’ll never be that stable. There’s also a lot of rotational stuff, to help with punching – a lot of resistance bands and so on.

“Supplement wise I take O.R.S, a really good hydration tablet. When I’m sweating so much, you can’t always replenish your body with water, because you’ll end up rinsing the salts out your body, whereas O.R.S gives me a good source of electrolytes. People don’t realise how important electrolytes are, but it’s scientifically proven, and where we’re doing cardio, strength and boxing we’re losing so many electrolytes, so I’m quite big on that.

“I’ll also take protein, as whether you’re training to gain bulk, get lean – anything, really – it works.”

“For lunch: two jacket potatoes and five boiled eggs, and for dinner later (around 2030) it will be a piece of steak or fish, quite a lot of potatoes and some veg. I don’t think people should worry too much about how much protein they’re taking in, if they want to get lean or lose weight they probably just need to cut down on what they’re eating. Whatever it is you’re eating – eat less!”
1600: Back in the gym
“Now we’ll go on to the hard work which is boxing. We’ll do shadow boxing, maybe 10 rounds of sparring, and then move on to bag work, pads, chin ups, dips, neck exercises and, finally, stretch out. It’s a full day, and we’ll be done around eight in the evening.”
2000: Play time
“I do like to chill out and play PlayStation. The boys are banging Destiny: The Taken King, and you can play with others, so when you’re at camp with a lot of boxers, it’s great to have a game you can play between a few of you.

“We’ll all be tired after training, but it means we can all chill out without using too much energy. Destiny: The Taken King is [an] all fighting action game, so you can imagine what it’s like – very competitive. The guy I use is Titan – a big, strong juggernaut. It’s weird, because it’s the same mentality I use when I’m in the ring.”

“I love a sneaky apple crumble now and again. Only on the weekends, though, or after a fight. Yeah man, I can’t help myself. Apple crumble is my weakness.”