I would never describe myself as wild or a ‘super’ feminist but when I took time out to count the number of people I had been intimate with, most of whom I am no longer in touch with, lets just say the figure was high.

The summary of who I am and how my body count got this high is simply because I am a romantic. I am always looking for love in the most unlikeliest of places. I am not a ‘bad girl’ but if we were not friends and I shared some of my escapades with you, I would be judged.

What made me count?

I realized how long it had been since I went on Facebook. I was so busy liking Instagram posts and retweeting funny tweets when I suddenly remembered the time before this when Facebook was the shiii. I was in a melancholic mood so I logged into Facebook, I checked my old messages. I laughed at how silly I was then and the stupid problems I had back then compared to real life situations now. You should try it though, go down memory lane, old chats, old friends, fresh uni days. I digress. I found myself in the people you may know section, scroll, scroll, scroll past the randoms and there he was.  I saw a picture of a guy, tall, dark, chocolate. I don’t know why I imagined tall, it was just a selfie. I stared at the picture for a while but then it didn’t even occur to me why I may have known him. I sent him a message. Just hello at first then it continued and spiralled into a full blown flirtation. Don’t get me wrong I welcomed it. I wanted it. 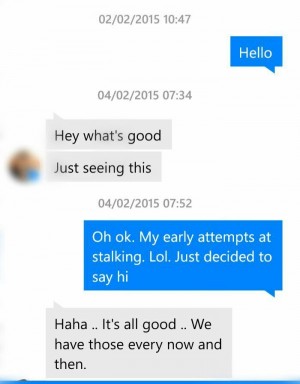 I can’t say if it was right or wrong but I started liking him, like really liking him. He must have liked me as well, I can never tell. He was constantly calling, texting, checking up, sending videos. I was in love even. We were not even in the same city when this started but I actually flew into town to see him.  The first time I saw him, he came to my apartment after a long day at work. We showered and slept and fulfilled all the fantasies that were in my mind the first time I saw his picture. In retrospect, maybe this was a mistake. We mostly stayed indors the short period I was in town. I went back to my city, the relationship stalled a bit but we were fine again. Then we had a disagreement.

One day, we were having a casual conversation and he asked how many people I had been with. I laughed it off because I had never counted before then. I told him that information was for my husband. I thought that was the end of it till we had a fight.

It was horrible. He told me I was washed up. He said he knew all about my adventures, how I had slept with one of his close friends. The insult was very long. I thank heavens for my very high esteem to be able to dust it off and move on.

At the end of it all that’s another man now, another number.

I am still a romantic. I still want to love. I wonder if the next one would think I am a ‘ho.

You Men Who Say you like Us Women Natural- You Lying!
Woman Crush: Wofaifada’s Biography
To Top
Loading Comments...