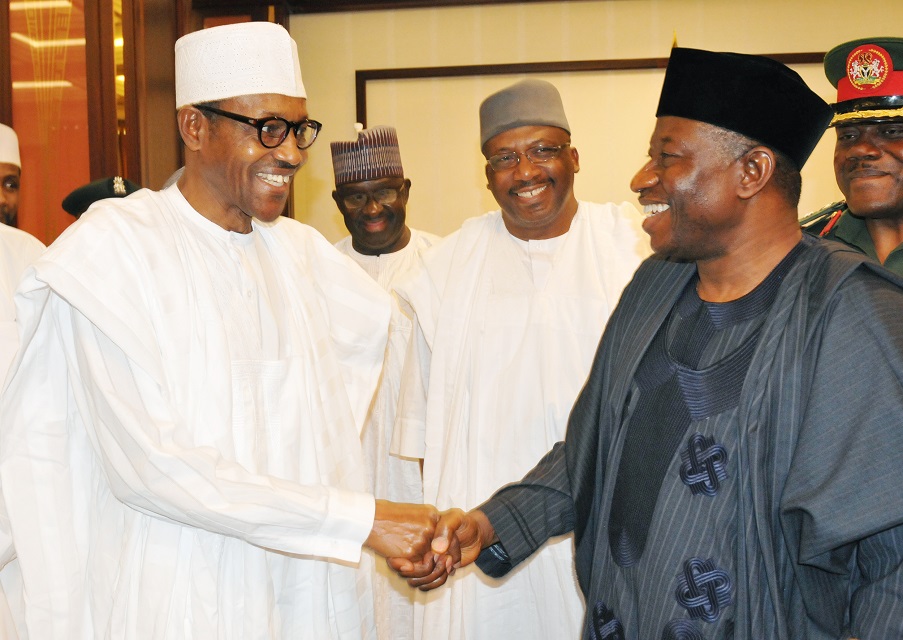 There are not many Nigerians eager to give former President Goodluck Jonathan credit for much besides what was often called ‘clueless’ leadership that left the country in a precarious position with regard to security and the economy. But Jonathan must be credited with giving the nation an analogy that has gradually become an integral part of our colloquial vocabulary – ‘the yam and goat’ scenario.

Jonathan, during one of his regular presidential media chats, made to clarify a previous controversial statement that “Corruption is not stealing”, but instead left us with a legend that involved goats and yams. He is however not alone in giving this sort of bumbling response; defining corruption is not the forte of the Nigerian public official. Only a few weeks ago, Mr Rotimi Amaechi, now minister for transportation, in providing his own definition of the concept, said something along the lines of “If you are a public official and a lady comes to seek your help and you sleep with the girl, you are corrupt.”

Thanks to Jonathan, we now understand that the public treasury is a barn of yams, and those who eat of it without permission are the goats. Since President Muhammadu Buhari assumed office, he has made promises of ensuring the goats who unduly fed on Nigeria’s yams get punished for it. While many initially assumed the local goat meat delicacy ‘nkwobi’ or the barbecued ‘asun’ version would be made from the apprehended goats, what we have been treated to thus far is only an interesting dance of the barn gatekeeper chasing the goats around, with half-chewed yam tubers still lodged in the mouths of these goats.

For seven months, the Buhari administration has tried and convicted more unnamed goats on the pages of newspapers than it has identified and dragged before the courts. On Tuesday however, it made a clear case against former National Security Adviser, Col. Sambo Dasuki (rtd). A presidential committee set up to investigate arms purchase from 2007 to 2015 returned an indictment against Dasuki, among others, for awarding fictitious and failed contracts that directly cost Nigeria staggering amounts in local and foreign currencies as well as remotely led to the loss of hundreds of troops and thousands of unprotected civilians who were displaced, maimed and killed by Boko Haram.

One would ordinarily have thought a warrant of arrest would have been quietly sought and obtained from the court, and the public later given the facts of Dasuki’s arrest. But many hours after the president was reported to have instructed that those indicted be brought to book, nothing has been heard of Dasuki being arrested and charged. Not unreasonably, the fear at the moment is that after the sensational headlines, only the hoof-prints of the goat and the footprints of the keeper circling them will be found many months down the line, while the goat will continue to enjoy its regurgitation and mastication.

Jonathan’s prescription on that infamous national television broadcast was to focus, not on punishing the goats for eating the yams, but to separate the yams from the goats. Perhaps following Jonathan’s advice, the Buhari administration has implemented the Treasury Single Account (TSA) policy, putting all the revenue of the federal government in a single account with the Central Bank of Nigeria (CBN). This should ordinarily call for more oversight of the nation’s resources, but it remains to be seen if the public officers will not again think up ways to circumvent the process.

The fact remains that as long as people accused of corruption are not effectively prosecuted and severely punished to serve as a deterrent to others, it is doubtful that merely aggregating the country’s revenue in one account will do it. The possibilities of making away with much more loot may even have increased for those who have the means. The introduction of zero-based budgeting (ZBB) has also been suggested as another way of limiting the access intending goats may have to barns of yam.

The budgeting method, generally attributed to Pete Phyrrr, demands that every agency of government present details of what it needs which is then planned into the budget as opposed to just allocating a certain percentage of the budget to that agency. Just like the TSA, the implementation of ZBB policy cannot of itself prevent corrupt officials from exploiting the system for personal gain either before or after budget approval, even if it can reduce what might have been excess funds available for the pockets of public officials.

Under the ZBB, government officials are expected to plan their agency, department or ministry’s annual budget as if starting from zero, as opposed to adjusting the budget according to the previous year’s spending. Every expense must be newly justified every year and no item is automatically included in the next budget. The ZBB system will therefore force government officials to justify the costs and assess the benefits of the budget every year to ensure funds are allocated to the most profitable projects.

Mr Pyhrr, the zero-based pioneer, is quoted by the Wall Street Journal to have called it a tremendous tool, “especially in times of economic problems, when you need to make reductions, or when you have significant and rapid technological change.” Presently, Nigeria is in need of such change to address an economy in recession.

The federal government has stated that “The zero-sum budgeting will be carefully coordinated to ensure that it is policy-driven; especially regarding the proposed social intervention policy of President Buhari’s administration,” but we cannot overlook possible challenges. The federal government may more easily identify expected recurrent expenditure in the form of wages and salaries for different cadres of the workforce, but it is doubtful same level of certainty can attend to capital projects.

Vice-President Yemi Osinbajo has repeatedly mentioned that the government will increase spending on infrastructure to stimulate the economy, and with attempts to diversify the economy which will likely increase capital expenditure in areas like agriculture, information technology and solid minerals, one would like to see how the government implements ZBB without stifling the concerned ministries.

It is clear both ZBB and TSA are designed to reduce leakages, ensure more government savings and keep the infamous goats from the yam harvests but the government cannot rely on such measures alone. It is time to strengthen the judicial institutions to function seamlessly to bring to justice all those who have inflicted dehumanizing pain upon the general populace. Humanized stories of sudden debilitating illnesses like cancer and organ failure that necessitate medical attention overseas must cease to be fait accompli thoroughfares to evading the arms of the law, which I hope get muscled enough under the current government.

Features do not reflect the opinion of MANLY.NG

Lagos was working before May 29, despite not being a fool’s paradise_ by David Adeleke
Addressing the fad of huge corporate fines by regulators_ Adewale Okoya
To Top