Football is a very lucrative sporting activity in the world and Nigerians who have made it to Europe, Major League Soccer, Chinese Super League and other bigger leagues are not only playing for the passion and glory of the game but are also playing for the money.

Nigerians have played and succeeded at the top level in the beautiful ball game and Manly Sports will be revealing some of these stars salary and total net worths.

10 of these Nigerian players will be ranked according to their net worth and projected investments returns.

He currently plays for Leicester City in England after making a move from Belgium side RKC Genk for €19m.

The midfielder is part if the Nigerian team that will be going to Russia come 2018 and he owns several cars and mansions both in the UK and Nigeria.

He moved to Leicester City from Manchester City at the closed summer transfer window. The forward shone in the U17 World Cup in 2013 in Qatar where he won the competition before transferring to City a year later.

He’s popular with trying to retain his Igbo heritage and style of investment. The forward full financial dealings are not known but his net worth is still a projection.

Born 3rd May 1996 in the city of Lagos, Nigeria. Iwobi moved to the UK with family and immediately started playing football.

Today he’s one of Nigeria heros after his goal against Zambia in Uyo in October help solidify qualification for the 2018 World Cup.

He plays for Arsenal FC in England having passedd through the youth system ranks. He is nephew to Austin Jay-Jay Okocha, former Nigeria captain. 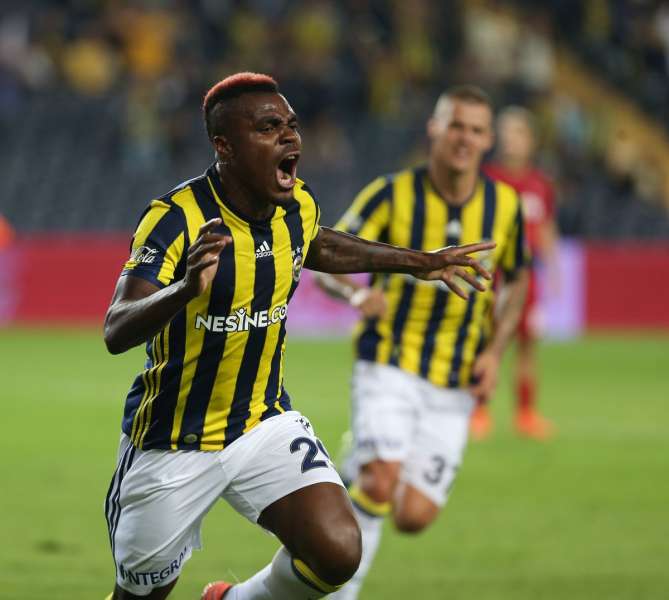 He currently plays for Olympiacos in Greece. Emenike was parr of the Super Eagles team that won the AFCON in South Africa in 2013.

He has played in different leagues such as the Turkish league, representing Fenerbache(twice), Russian League for Spartan Moscow. He played for West Ham United on loan from Fenerbache. He also played for Al-Ain in the Middle East.

His current salary structure is not known but his salary at Fenerbache was 50,000 Euros before his close season transfer to Greek side, Olympiacos.

The Nigerian made name for himself after netting 18times for Kano Pillars before moving to VVV Venlo in the Netherlands in 2010. He spent 2 seasons before transferring to CSKA Moscow in 2012, spending 4seasons there .

He signed for Leicester City in 2016 who won the Premier League a year earlier.

His most recent known investment venture was the opening of a petrol station in the City of Kano.

The strike was born on 16th June, 1989 in Lagos state Nigeria and was raised in Edo State.

While playing for Prime FC, he was scouted and went on trial with Lyo Oslo. He also played for Udinese, Granada, Cesena and Watford. At Watford, Ighalo was instrumental in helping the team return to the Premier League.

In January 2017, he completed a big money transfer to the Chinese Super League where he is to earn a large pay.

Moses lost his parents in religious clashes in the Northern city of Kaduna. At 11, he was sent to the UK and played for Crystal Palace youth side.

He went on to establish himself and subsequently moved to Wigan Athletics. In 2012, Chelsea FC came knocking and eventually signed the talented winger for GBP11m.

He won the Europa League in his first season at Chelsea. He went on loan to Liverpool, West Ham and Stoke City before Conte installed him in his team which won the League in 2017.

He is currently a nominee for CAF African Player of The Year Award.

Born in Akwa Ibom, South South Nigeria, the shot stopper was part of the Enyimba International that won the Caf Champions League twice in 2002 and 2003 before moving to Heartland of Owerri. He has played for Bnei Yehuda, Hapoel Tel Aviv and Maccabi Tel Aviv.

He is currently playing for OSC Lille in France also was part of the Super Eagles Side that won the AFCON in 2013.

The forward moved to Italy at just 16, where he made himself a strike force. He was recruited from Reggiana by Inter Milan. The forward scored many goals for the Italian clubs before switching to English side, Newcastle United.

He played for Newcastle together with Michael Owen until the club failed to maintain it premier league status. He has represented Wolfsburg, Rubin Kazan, Levante, Birmingham City(scoring a last minute winner against Arsenal in the league cup in 2011) and Seattle Sounders before opting for China in 2016.

Mikel played for Plateau United before going on to sign for Lyn Oslo in Norwegian league.

He moved to Chelsea in a controversial transfer with the player having agreed to join Man United.

He played for Chelsea FC in England for over 10years achieving both medals and financial success with the team.

In December 2016, Mikel agreed terms with China based club, Tianjin Teda where he ply trade and also the captain of the side.

Top Haircuts Rocked by Nigerian Male Celebrities and Their Names
The Lessons I learnt from Trying to Buy Chevron Netherlands
To Top
Loading Comments...