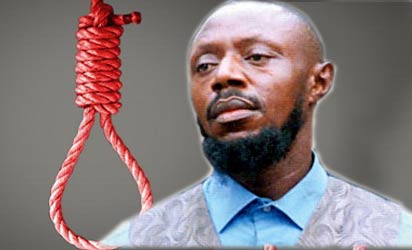 Today, the General Overseer of the Christian Praying Assembly, Rev. Chukwuemeka Ezeugo, a.k.a Rev King was re-sentenced to death

In would be recalled that Ezeugo aka Rev King was convicted and sentenced to death by hanging on January 11, 2007, for the alleged murder of his church member, Ann Uzoh. He was arraigned on September 26, 2006 on a six-count charge of attempted murder and murder.

Feeling his judgement was unfair, Rev King took the case before the Lagos Division of the Court of Appeal.

His appeal was however said to have to merit by presiding Justice Ngwuta. Therefore the judgement of the court of appeal was affirmed
Rev King poured petrol on the diseased, Uzor and five others. Uzoh died on the 2nd of August.

“I am struggling financially”_ Sunday Oliseh Explains Why His Team List is Being Delayed
Emmanuel Stole His Boss’s Car to Celebrate Valentine with Bae| Now Chilling in Police Net
To Top
Loading Comments...