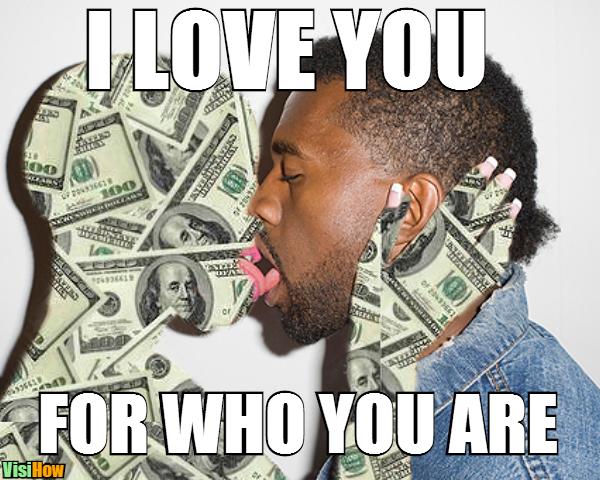 When you give she’s happy. When you can’t give she becomes unhappy with you, even gets angry. She tells you she received better treatment in her former relationship. The question then is, why doesn’t she just go back to that relationship? She had a better deal!

It may be in your interest to conduct research into the economic state of her last boyfriend. If he couldn’t keep her with all the money he spent, what makes you think you can? I have a feeling she moved on when his money ran out! You have spent all you have on her and she’s still complaining. Your so called “girlfriend” is a leech. That is the blunt truth. You know I’ll always say it as it is. Truth does not participate in popularity contests.

A leech is a blood sucking worm with two suckers at each end. That’s why Solomon wrote: “A leech has twin daughters named “Gimme” and “Gimme more.”” It’ll never be enough. Ever heard of “vampire girlfriend”? Is your surname to be Dangote, or Gates, or Walton, or Buffett. Maybe Ellison, as in Larry Ellison of Oracle! I will be quite  disappointed  if you don’t have a mega bucks surname. Was quite surprised actually considering your endeavour! I don’t know how you’re going to sustain the “relationship”.

And you’re a salary earner?! Aren’t you training yourself to go to jail? At the rate of her demand you’re going to commit fraud at work, or end up a chronic debtor. And I do hope she’s giving you 24 carat love and affection. Her brand of love must be so rare considering how expensive it is!

Are you sure you’re the only boyfriend? She seems an “esusu” collector to me. (An esusu collector is the financial secretary and treasurer of a mutual fund club). How are you going to satisfy this woman’s lusts? Can’t you see she thinks she’s smart? That she sees you like an m-u-m-u? (sucker) You toil for 30 days and at the end, your sweat and labour she comes to collect. You are the President of Labour Party. And you think you’re being a man! That is a false definition of masculinity you’ve taken on. I can just see this woman charter gold jewelry and the seller wondering how she’s going to pay. I can see her pick up her phone, scroll through the address list: “MuMu 1”, “MuMu 2”, “MuMu 3”, “MuMu 4″… You’re No.4.

I see her say “Baby!” and you start grinning and feeling important. Then she tells you how you promised to buy her “that” triple banded gold, and you start wondering. “The type Moji wore to her grandmother’s funeral”. You can’t recollect but you respond “Hmn hmn” to appear important. She mentions the amount and your smile is frozen. The bulging muscles of your eyes tug at your mouth, pulling it in. (The jewelry seller is shaking her head in incredulity by this time, admiring how wonderfully manipulative she is). “So when can I come for it – the money?” she asks pointedly in case your mind seeks to become smart. You doodle with your pencil, purse your lips. You know you’ve been had. There’s nothing you can do. “I’ll see what I can do” you exhale. “Hmn, come on Thursday!” (Thursday is your payday. She knows). “Thursday?!” she acts surprised! “You know how I like to look nice for you, to look like your woman!” She’s twitching her nose at you by this time, rolling her eyes up at your gullibility. The jewelry seller is having a fit of laughter in an increasingly difficult to maintain muted tone. She covers her mouth. “I’m expecting something on Thursday,” you say very importantly. (Of course you’re expecting your salary!) “Expecting something on Tuesday as well,” you lie. “But Thursday is more certain. Thursday is more certain.” “Okay dãrling!” she says demurely. Mchew! she kisses you over the phone. “Mwah!” she adds for emphasis! “My baby! You always make me háappý!” She says this to the tune of “I Believe I Can Fly!” “I’ll come and see you tomorrow evening,” she lies. You doubt. You know an “emergency” will arise. Her “mother’s sister#039;s only son” will be appropriately “rushed to hospital”. She’ll need to go and see the “poor boy” in “critical condition.” He’s going to swallow Dettol thinking it’s milk! But you know she’ll show up on Thursday. Even if there’s a tsunami. But you look forward to holding her in your two arms. You salivate at the prospect, grinning in greed like my Lhasa dog at the sight of canned beef. The promisory euphoria of holding the appropriately named Aduke lingers on in your mind. “Aduke” in literal meaning is someone people compete and fall over themselves to pamper and spoil.

But there goes your budget for the month and much, much more. You’ll survive on Garium Sulphate (GaSO4) – a granulated cassava staple popularly known as garri. And that promise to your sister has to be postponed, yet again. Your parents will continue on the queue.

Aren’t you foolish to date such a woman? Ever heard of the term, “Devourer”?! You can’t afford her on every level. Don’t be foolish. She has no interest in you whatsoever. You’re just cash-flow. And you’re deluded if you think you can keep her. Ask the last man.

Your relationship is transactional. Will only subsist for as long as her cashflow projections hold up. Cut your losses. Redeem your gullibility. She’s running an emotional Ponzi scheme. You better run – while you have your shirt on your back!

I wish you common sense, and wisdom.

This  is a compilation of a series of tweets by @lekealder tagged  #Letr2Jack.